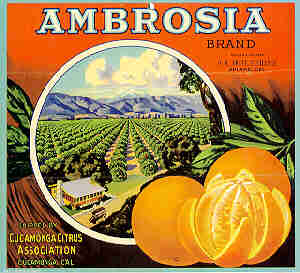 What Phillip Marlow Saw Along Highway 99

We ate some breakfast in Alhambra and I had the tank filled. We drove out Highway 70 [99] and started moving past the trucks into rolling ranch country. I was driving. Degarmo sat moodily in the corner, his hands deep in his pockets. I watched the fat straight rows of orange trees spin by like the spokes of a wheel. I listened to the whine of the tires on the pavement and I felt tired and stale from lack of sleep and too much emotion. We reached the long slope south of San Dimas that goes up to a ridge and drops down into Pomona. This is the ultimate end of the fog belt, and the beginning of the semi-desert region where the sun is as light and dry as old sherry in the morning, as hot as a blast furnace at noon, and drops like an angry brick at nightfall.

The Lady in the Lake,


Granted, the famous detective probably saw things more exciting than this once he got to Lake Arrowhead. But on his way out there from LA along old US99 (which shared the pavement with US70), the citrus groves seemed to go on forever. Their meager remnants remind us of the verdant landscape that was the dominant roadside view along the old highway for the first half of the 20th century.

And Marlow was correct; it is a semi-desert. And as in much of California, it took water, in the form of irrigation, to transform the "Inland Empire" into the relatively lush subtropical landscape that regaled the motorists' senses. That is the Southern California that I like to keep in my memory. 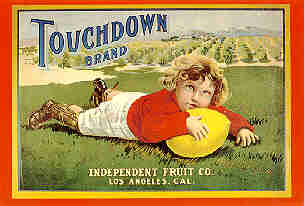 Not that brush and rocky washes don't have their own beauty. But we spent some of our formative years not far from the old highway route, in the midst of the deep green groves, the rustling eucalyptus trees, the furrows running with precious water tapped from every available stream that ran out of the mountains, and later coming all the way from the Colorado River. This citrus country was past its zenith by the 1950s, but enough remained that the promise of fecundity, or at least the pleasure of living near it, continued to attract the hoards from colder climes. As this warm, fertile land has done for over 100 years now.

By the late 1800s, the huge ranchos were rapidly being broken up into subdivisions by land speculators, unscrupulous or otherwise. A process that continues. Many of these early subdivisions, sometimes called colonies, were laid out for prospective citrus farmers and were advertised country-wide. The more moral developers actually provided the promised roads and irrigation systems. The climate was perfect, the people came.

Now oranges had been around since the mission days, but those were seedy and sour. In 1871, Eliza Tibbets, one of the very early colonists coming to Riverside, brought west with her (besides her husband Luther) cuttings of the Washington Navel orange. The navel orange came from Brazil by way of the US Dept. of Agriculture in Washington DC, hence its name. In their new home, the fruits of these cuttings were found to be meaty, sweet, and seedless. They were an immediate sensation. 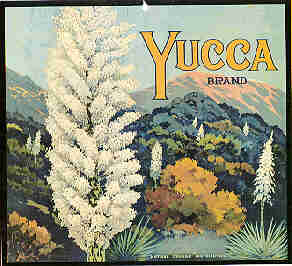 That, combined with the subtle marketing ploys of the California Fruit Growers Exchange (later Sunkist), were just what the fledgling industry needed. To understand how successful their campaigns were, just think how orange juice and health are linked in the American psyche, how breakfast without orange juice with is unthinkable. Vitamin C wasn't even "discovered" until 1912. Somehow, oranges became synonymous with health and sunshine and California itself.

It turns out one could actually make quite a good living selling oranges. Citrus land was expensive initially but the rewards greater. Southern California citrus acreage grew from 83,600 acres in 1903 to 329,700 acres in 1944, when Marlow was cruising the highways. It is estimated that in 1929, the owner of a productive ten acre grove would realize a profit of $2,800. That was four times the national average income of that year.

Citrus growers, despite the mud on their boots, were a genteel lot. Their orchard homes were beautiful if not always elegant. Some of the homes still stand, islands of history set amidst oceans of concrete, tract homes, shopping centers. 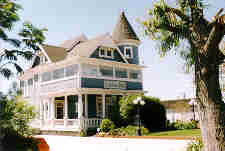 Here is a photo Kathryn took of a grove house on Holt Blvd (Highway 99) in Ontario. It was built in 1893 for A.C. Morehead. In 1939, it was still surrounded by orange trees, but the family no longer resided there. It was turned into a popular restaurant, the Orange Grove Inn. The house was still intact when we went by in 1998 but urbanization had taken care of the grove.

The growers disliked the concept of "advertising", viewing their publicity efforts along the vein of "educating the public." Call it what you will. I'm just glad that they took to pasting the colorful labels on the sides of their wooden fruit crates. These labels are now highly collectable commercial art. 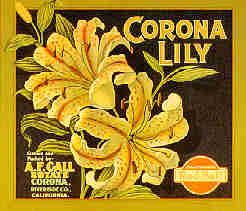 Roads and highways played very little part in the success of the citrus industry. It was railroads that opened up the country. Excursion trains brought in the prospective buyers. Freight trains hauled out the produce, and every packing house had its own spur line. It could be said that improved roads and automobiles were a factor in their demise, however, a subject too involved to get into for this "Hot Topic."

Be that as it may, the orange trees with their mountain backdrop made the drive out from LA an enjoyable one. The passing scenery was green and geometric. The groves were in a grid pattern, each square surrounded by tall windbreaks. Straight roads were lined with palm trees. Watching the rows whip by outside the window made me pleasantly dizzy.

Some Orange-oriented Places to Visit Near Old Highway 99:

* The 7 miles of Victoria Ave. through Riverside

* Impressive mansions, built with citrus dollars, in Redlands on Fourth, Eureka, and La Verne Streets and Highland Ave. The Kimerly Crest at 1325 Prospect Dr. is open for tours.

* The Gage Canal, which brought water from the mountains to the groves, in Riverside.

* The Parent Washington Navel Orange Tree in Riverside, corner of Arlington and Magnolia.