“My father was born in 1915 on a farm near Corcoran. My dad raised us in Los Angeles and whenever we traveled to visit the family farm in the 40s and early 50s, of course we'd take 99. When we'd reach the area of the Grapevine, my father would retell how his family used to travel the OLD road up the mountain in a Model A. It seems that Grandpa would drive the car as fast as he could around the hairpins, usually on the wrong side of the road. My dad's and his brother's job was to sound the claxon horn on every curve in the hopes of warning oncoming drivers. My father explained that the Grapevine got its name from the winding nature of the original road. [NOTE: The name is apt but actually was taken from the Grapevine Canyon which the road descends.] There is a sidebar to my family's relationship to 99, in that my grandpa worked as a laborer on the St. Francis Dam in 1928. It seems that the night before it broke he asked for leave to visit his family, and so he escaped the disaster. The disaster wiped out several hundred people all the way to Ventura and took out the bridge at 99 near what is now Magic Mountain. As to my own memories, as kids we accepted the heat as normal. My only complaint is that my dad was not one to stop along the way, and the tantalizing "Ice Cold Watermelon" stops went by as a visual memory, not an existential experience." ” Jim 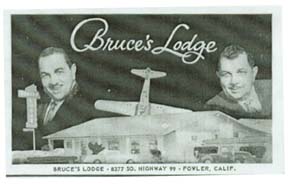 “I remember being a very small girl riding in the back of the station wagon on one of our many trips to see my grandparents in Riverside. We lived in the East Bay and alternated between 101 and 99 for our annual trip south. I have a distinct memory of agonizing over what appeared to me to be a crashed plane that stood tail up in the roof of a restaurant along side of the road. What was the fate of the people aboard was my all-consuming concern. Apparently I wouldn't let it go and I got so bad about worrying that on one trip my father finally stopped there so that I would believe that no one died in the crash. I drank a Shirley Temple in the lounge while being assured by the men inside that they had bought the plane and placed it nose down on the roof...Now the story behind my childhood memory is complete. But, as all parents who were once children know, the perceived reality of a child's consciousness is a force to be dealt with; very real indeed!”