Here are a few more memories and photos for you to enjoy. Send yours to Living Gold Press for the next installment.

"Look what I found recently in a shoebox of old photos! Although it was unlabeled I knew immediately where it was (and still is)--the Grave Creek Bridge on a short piece of pre-99 Pacific Highway in Sunny Valley between Grants Pass and Roseburg, OR. And I knew when it had been taken (although I don't directly recall being there)--on a family vacation taken in 1962 when I was ten years old, a long road trip that took us from near San Diego to Victoria, BC, the Seattle Worlds Fair being the prime destination. Curiously, I remember almost nothing about the fair itself. What I remember is the days on the road getting there and back, much of it on US99. The rural landscapes left the most lasting impressions--stopping to swim or skip rocks across the many Northwest rivers, getting sticky from fruit bought at roadside stands. The Rambler American was fitted with those new-fangled seat belts and uncomfortable hard plastic seat covers. It was brand new but we made almost daily stops at roadside garages. That was when the alternate meaning of the word "lemon" was explained to me." Jill

"In my early days of travel from Redding there used to be many springs by the highway. People used to bring their bottles and bring home what was considered pure mountain water. One especially comes to mind on the west side of 99 just before the downgrade to cross the Pitt River bridge. There were many places on the steep mountain roads where people could get water for their overheated radiators. Some of the springs were even there from the days of the horse. Some years ago the State closed down these springs for sanitary reasons and liability problems."

"We used to drive from Orange County to the Bay Area at holiday time. I carried four or five model cars with me, and held them up to my face and pretended I was driving along US99 into Bakersfield, Fresno, Madera, Manteca...I remember the old buildings at Wheeler Ridge and how badly I wished we could stop so I could get out and explore them, and the Lebec Hotel..." Jason

"Back in the late 50s and early 60s I was stationed at Camp Pendleton and the Marine Corps Recruit Depot in San Diego. My home and family were in Gold Hill, OR. Sometimes I would drive home and sometimes I took the Greyhound. On one particular Wednesday Thanksgiving eve I left San Diego around 5pm on the 800+ mile drive to Gold Hill. Somewhere north of Sacramento on 99W about 3 or 4 in the morning I became very tired and needed to stop. I awoke the owners of a small motel (town name forgotten) and asked for a room. The lady wasn't the least bit disturbed by my early morning arrival. When she discovered that I was a serviceman on my way home for the holidays she refused payment for the room. She woke me after about four hours of sleep and sent me on my way with a cup of hot coffee and a care package of snacks to eat along the way. This act of kindness has been remembered for over 40 years." 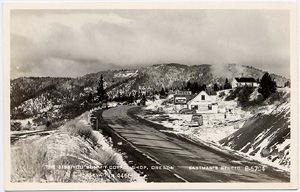 Jesse loved every minute growing up right on 99 at the top of the Siskiyous on the Oregon/California border in the early 1960s. His dad Jerry owned and ran the Summit Cafe and gas station. Things got really exciting in the winter time. When a snow storm descended, the cafe was warm and the windows were steamy from the hot coffee and hearty fare being prepared for truckers seeking respite. That's when Jerry got into his large GMC outfitted with huge tires and went out to find them. He helped the truckers chain-up, then helped push or pull them up to the top. In the summer, Jesse roamed the hills at will. When construction of the "new" Siskiyou Pass (on I-5) was in progress, little Jesse had to be located before any blasting could be done. One time he tumbled down the edge of the large new cut into a caldron of earth moving equipment. With the freeway set to open in early 1966, the Summit Cafe closed up and the family moved to Rice Hill, Oregon (another 99 town) and opened another restaurant. Jesse (as told to Jill)
And there's still more! Page 2