Skip down to Siskiyou Summit Beacon

(Photo from Pump and Circumstance: Glory Days of the Gas Station by way of Atlantic Richfield Co. Corporate Archive)

Most of us can remember when "gas stations" were really "service stations" manned by smiling, helpful attendants. That wasn't so long ago. But can you imagine a chain of stations that, in the public's eye, were considered to be splendid, luxurious stopping places, their restrooms supremely sanitary and even opulent?Such were the Richfield Beacon Stations which once stretched along the entire length of Highway 99, all the way from El Centro near the southern end of the highway, to Tacoma, Washington. A far cry from the 55 gallon drum-and-funnel-setups in front of the livery stable or general store that were the first turn of the century "gas stations".

We took to the automobile with such enthusiasm in the early 1900s that businesses to serve motorists weren't far behind. Initially motorists were a hardy bunch who battled mud and dust and preferred roughing it in the countryside to urban amenities.

But as the dirt highways began to be graded and covered with their narrow ribbons of concrete, driving was less of an ordeal, and Americans became more mobile. Those big old cars were gas guzzlers, and fuel needed to be readily available along the highway. Wives and children needed frequent stops to unwind and "freshen up." The concept of "luxury" gas stations was born.

The architectural design of such stations went far beyond the functional box with overhanging canopy mode. In our Richfield Beacon stations, built in the early 1930s, there were two designs, one for the southern climes and one for the north. The cutoff point was Willows, CA. In that town along old 99 there still stands (now housing a trucking company) the furthest north of the red tile roofed Spanish style stations. The next one to the north in the chain was built in Mt. Shasta City in the steep-roofed French Revival style and fortunately for us, it still stands (although empty) as well.

This chain had an added feature that is the source of the "beacon" in the name. Each station was shadowed by a 125' tall light-topped tower that was designed to help guide airplanes at night. Additionally, there were a number of beacons/filling stations on landing strips themselves, as well as a number of stand-alone beacons spread in-between the airfields and automobile filling stations. 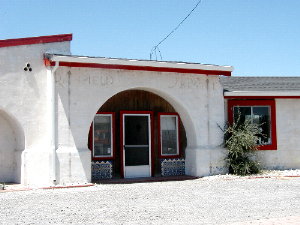 In those days planes routes generally followed easy-to-see roads or railroad tracks. The beacons were set up generally well under 100 miles apart. So not only were they a useful navigational tool for airplanes, but the filling stations were usually close enough together so that before your automobile gas tank got too low, another beacon would pop into view, and it would be time for another break and a fillup.

According to the information I got from ARCO, the chain consisted of 24 service stations. Besides Highway 99, 101 (in CA only) boasted quite a few Richfield Beacons. From south to north, the following 99 towns were home to Richfield Beacon Stations: El Centro (airfield), Beaumont, Castaic, Bakersfield (airfield), Visalia, Merced (airfield), Willows, Mt. Shasta City, Siskiyou Summit, Grants Pass, Roseburg, Eugene, Longview, and Tacoma.

Besides the two remaining stations already mentioned, the one just north of Eugene, OR on River Road (old Highway 99) is still standing and in use as a wedding chapel. I know nothing about other towers or stations along 99 that may still be around, and would appreciate information any of you might have! I am just pleased that at least a few treasures can still be found left over from the glory days of gas stations. The book Pump and Circumstance: Glory Days of the Gas Station by John Margolies is a fun look at the evolution of the gas station over the course of the last 100 years that you all should enjoy.

This is what it looked like at the Siskiyou Summit on the California/Oregon border in the 1930s. The view is looking to the north, on this the highest point of elevation (4511') along what used to be US99.

On the left, the Summit Ranch Lodge predated the Beacon station by at least a decade. A major rebuilding of Highway 99 in 1940 through the summit area resulted in a deep road cut. So much material was taken out that the actual high point of the highway was in a new location a short distance to the south, and the elevation of the mountain pass had been decreased by 47'.

Exactly when the Beacon station disappeared is still under investigation. A "new" Siskiyou Summit Cafe (including a gas station and cabins) was built (in the 50s?) and did a lively business until I-5 was completed on an all-new alignment in the mid-60s.